I’ve been to Zhengding one and half years ago, it was part of my pack-and-go visit to Hebei province during a short three-day holiday. At that time, after a visit to Bilu temple in Shijiazhuang for its famous wall-paintings (I hope I could cover that in a separate blog post in future), I was thrilled by these wonderful artistics and wanted to see more immediately, therefore I queried at the souvenir shop of Bilu temple: Is there anything else like these here near Shijiazhuang City?

Zhengding was the answer and it is not far away. One and half hours later, I was in Zhengding which are at 10km northeast of Shijiazhuang City centre, and enjoyed an pleasant visit.

I visited Zhengding again in this June with my wife who haven’t been but always wanted to.

Zhengding is famous for its grand royal monastery Longxi temple and four pagodas each one in different style.

Longxing Temple (Temple of flourishes) is also called Dafosi ('Temple of grand buddha', but actully is a grand Guanyin inside the main hall) by locals. I knew only about pagodas in Zhengding during my first visit so that the monastery were put on bottom of my visit list (though all the places are not too far from each other) and I was surprisingly pleasant about it. 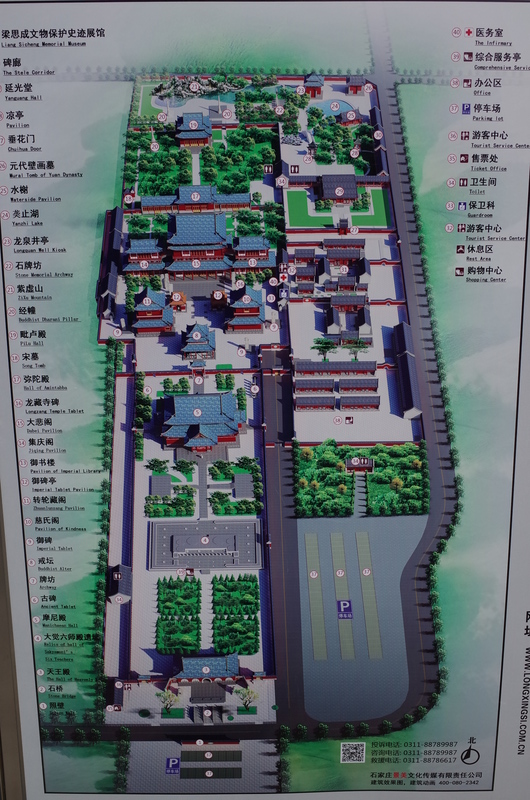 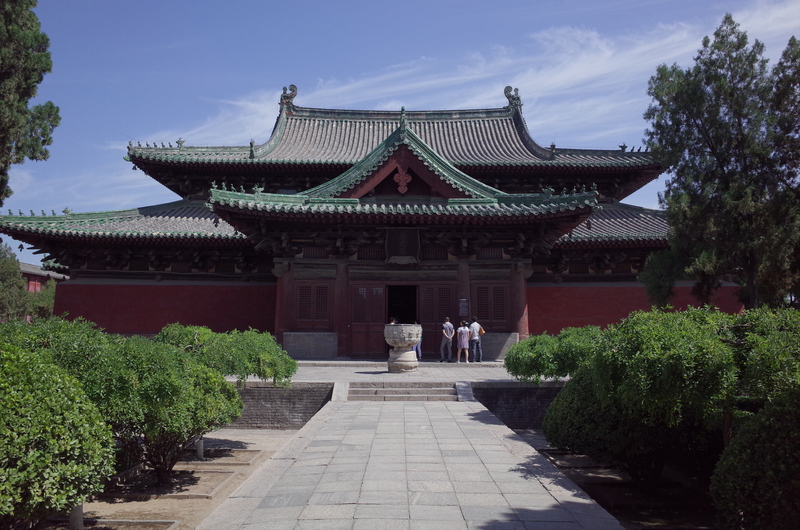 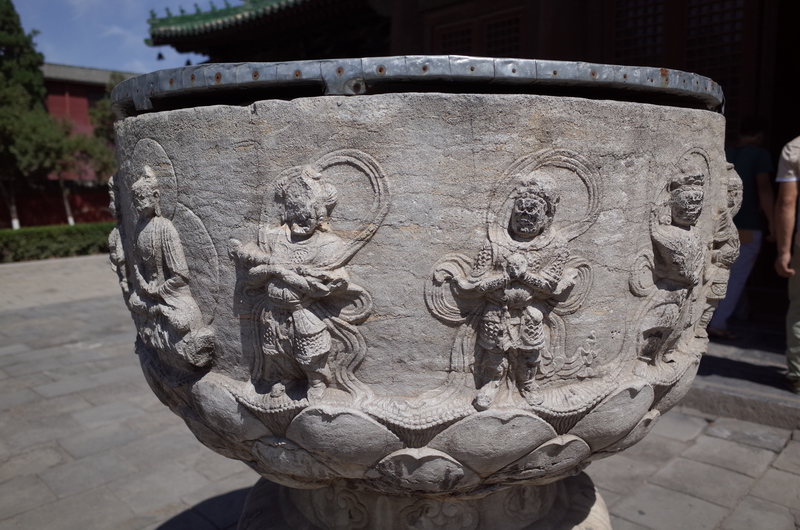 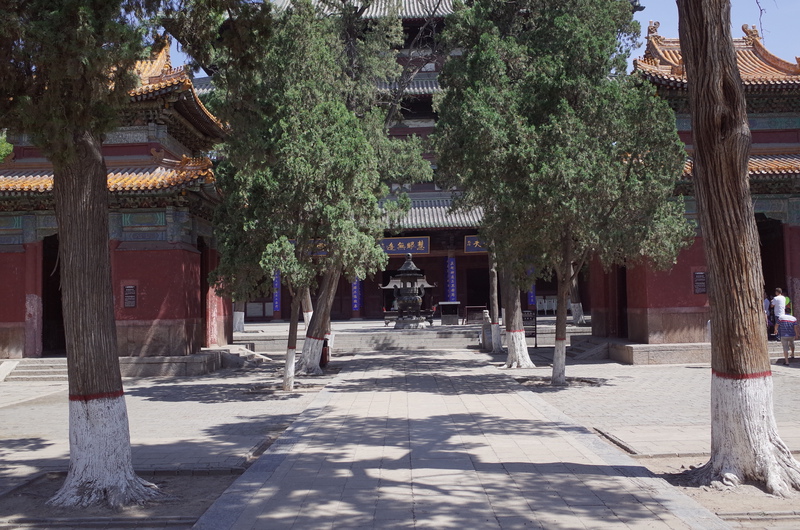 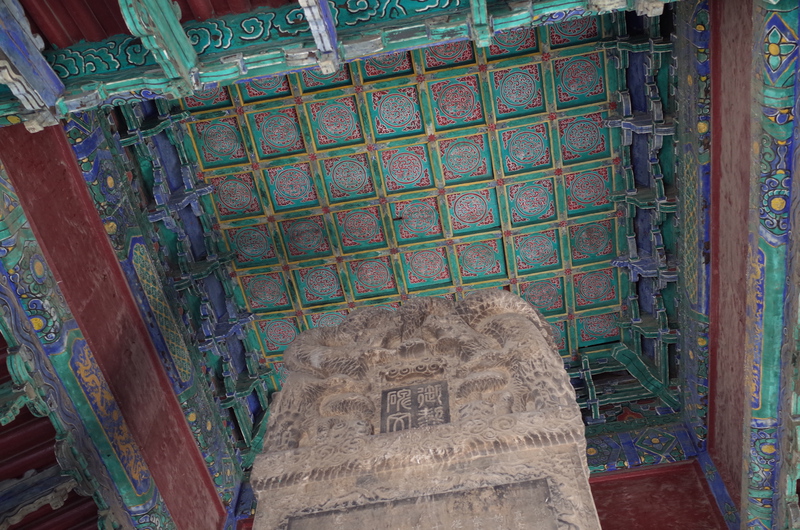 Rotating bookshelf in the Pavilion of the Rotating Library 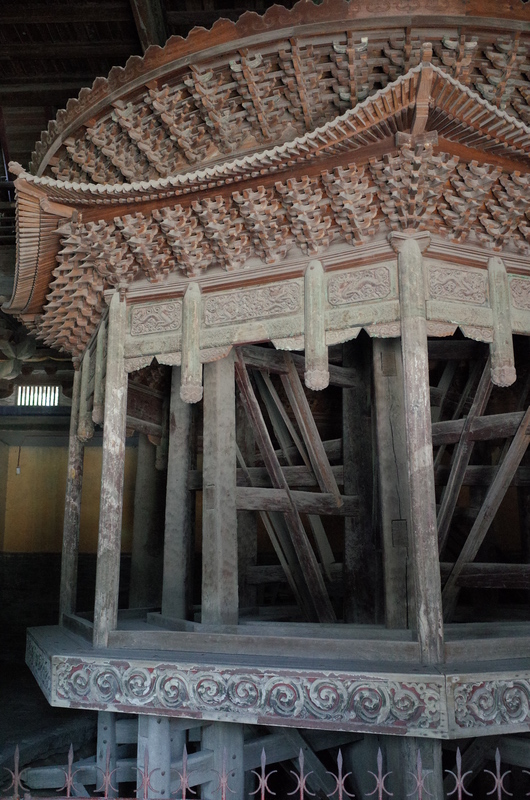 The Buddhist altar is built in Qing dynasty which helds buddhist ceremonies. 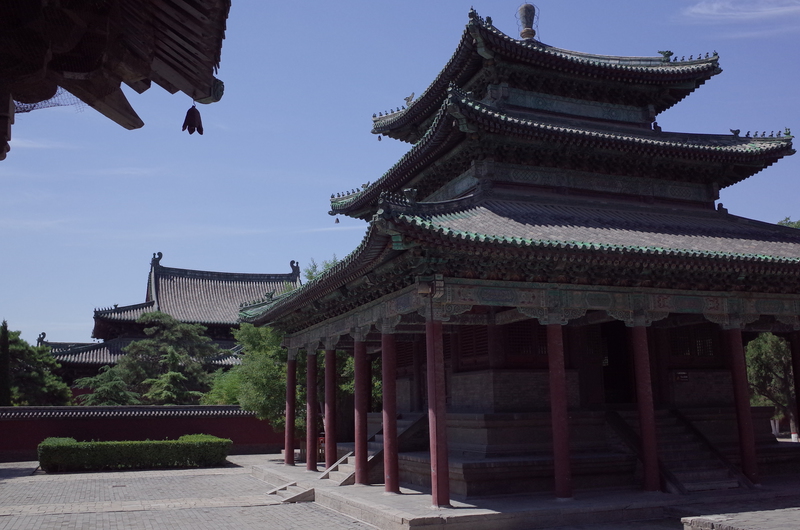 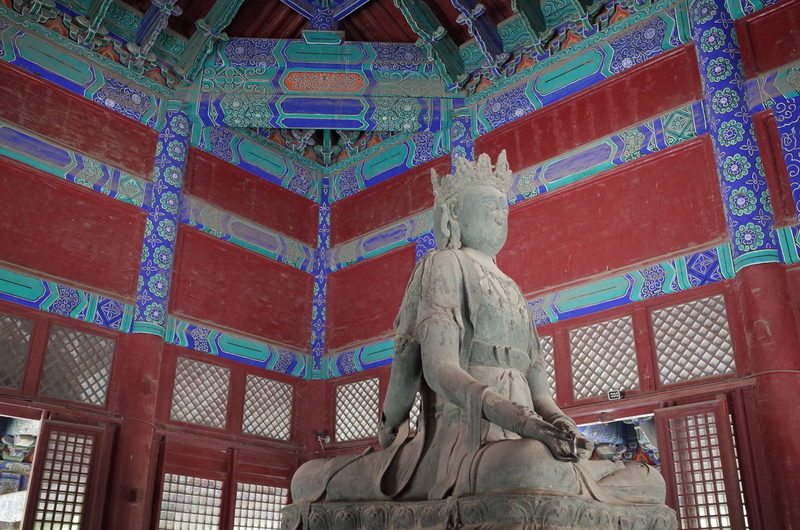 The Main Hall houses a bronze statue of GuanYin whose height is more than 20 meters. Another grand scale GuanYin aside of the clay one in Ji Country. The hall in Longxing temple is also the first time I saw halls are connected by staircases. 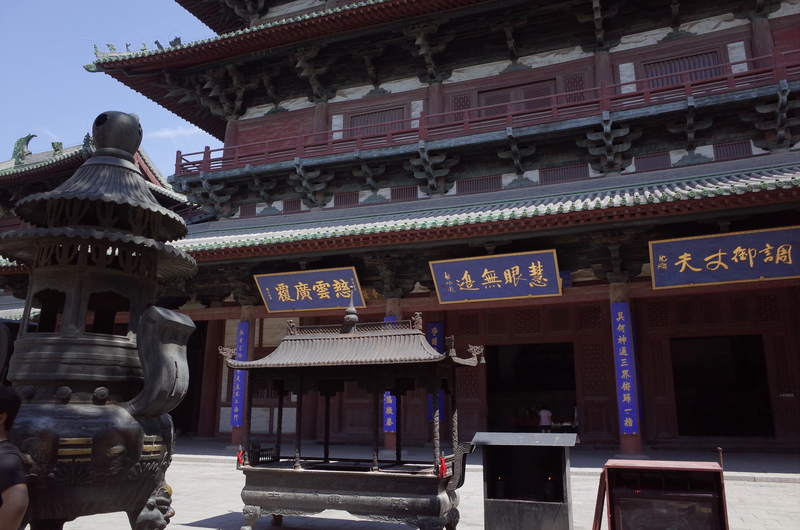 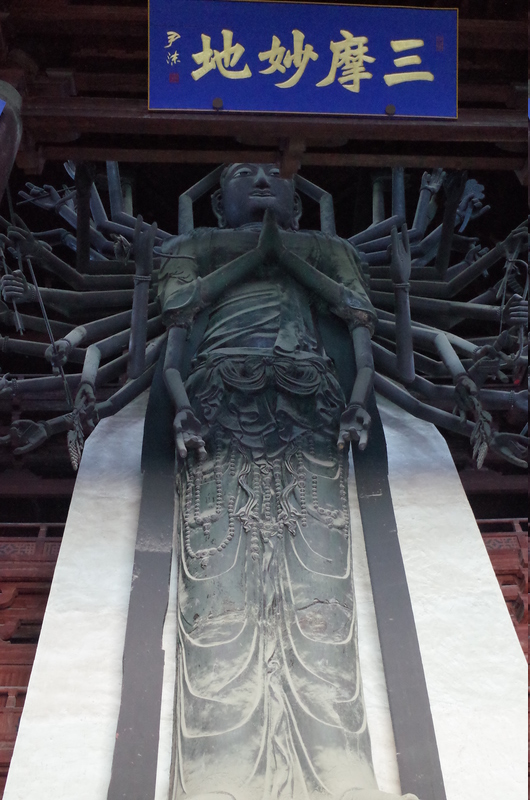 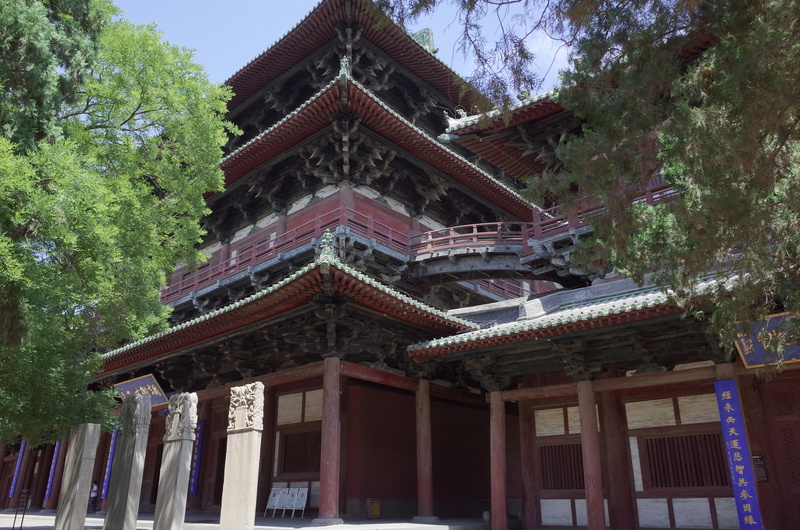 After Longxing Temple, We went to Kaiyuan Temple. It is an historical site with one of the oldest kind of drum tower of Tang Danasty style in China, and the largest Bixi(tortoise like beast) in China. Inside Kaiyuan Temple, Xumi pagoda(Sumeru Pagoda) is built in Tang dynasty. 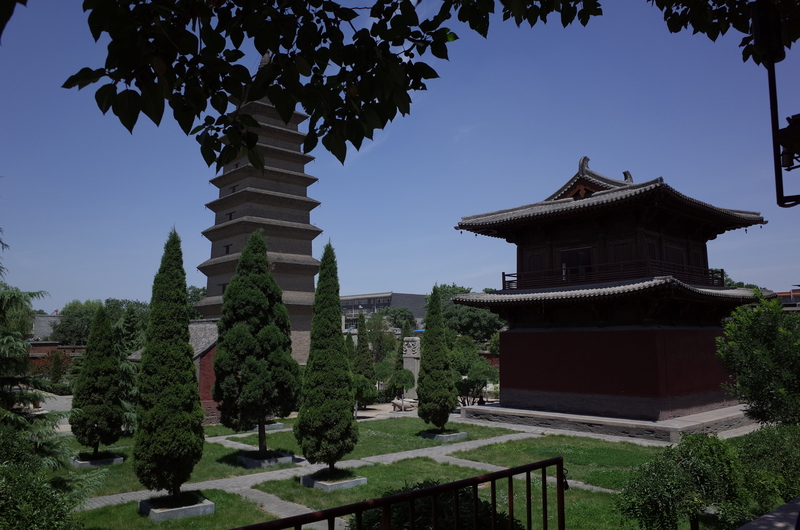 Lingxiao Pagoda is the biggest among Zhengding pagodas, It's typical present-day pagoda style makes it well-recognizable as a chinese pagoda. It was built in Song dynasty. It is open to public but once you go near the pagoda you can neither go inside the pagoda nor taking good pictures of it, so a snapshot nearby is a good choice. 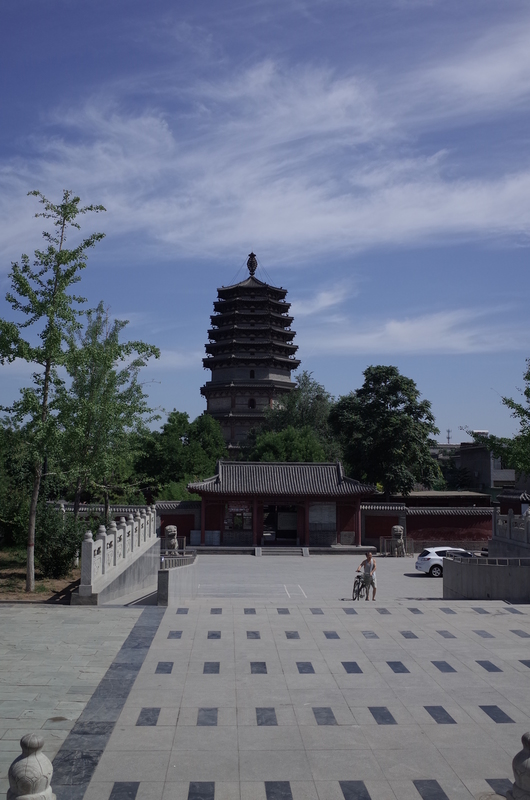 The Hua Ta (Hua Pagoda) has an unique style in my opinion (with decorating of animals and buddhas, there are only 2 or 3 pagodas of this style in China). It was the only pagoda in Zhengding that you can go inside, Unfortunately You cannot go upstairs onto the platform to get an view of Zhengding City now as I did one and half years ago. I was told it was forbidden just after one week after my first visit here. 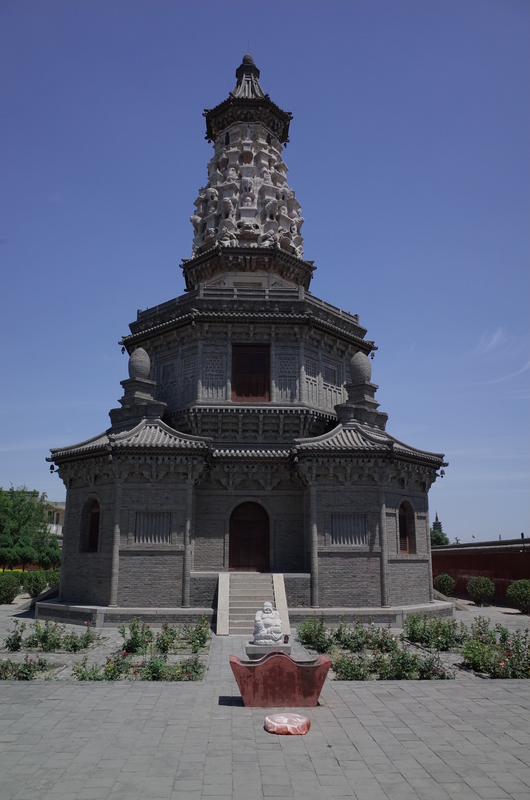 I don’t have the time to visit Chengling pagoda with my wife but I did visit it during my first trip. It is located inside a buddhist temple(Linji Temple) built in Tang dynasty. Linji Temple attracts many japanese tourists since it is one of the birthplaces of Zen buddhism.